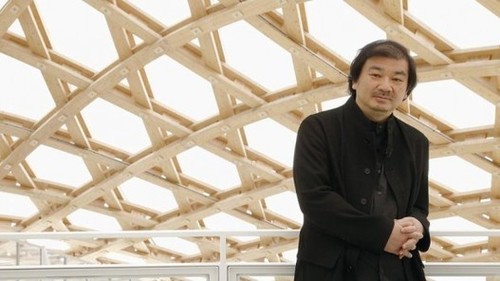 “Today, architect Shigeru Ban will walk away with $100,000 and a bronze medallion—maybe someone will throw in a bouquet of flowers, just for good measure. He will be honored with the Pritzker Architecture Prize, an award granted annually to a living architect for his or her contributions to society. The choice of Ban, a well-regarded architect at Kyoto University of Art and Design who’s become known for disaster-relief projects, eases at least one of the criticisms the Pritzker jury has received in recent years; that is, the award has become focused on male starchitects, to the detriment of the award’s ambitions to recognize humanitarian architecture practices, especially among women. (It wasn’t until 2004 that the organization granted an award to a woman, with the honor going to Zaha Hadid.)”

Shigeru Ban is a man who is an architect for the people not just part of that elite group of bow tied (males). Architects were considered something for the wealthy only. Ban has been involved in numerous disaster relief projects besides condos and other prestigious work.